Sydney born journalist Georgia Cassimatis entered Hollywood and found all that glitters is not gold. 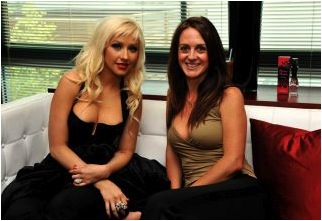 Georgia with Christina Aguilera, one of the many celebrities she has interviewed in her career.

The car you drive is your business card over there. Everyone starts trying to keep up with everyone else and people start living false lives.

“Are you free next week to interview Angelina Jolie for a cover story?” the words flashed across her computer screen.
It was an email from the deputy editor of Cosmopolitan.
Lounged on the couch of her West Hollywood apartment with notebook in lap, Georgia Cassimatis felt a jolt of excitement as responded with “Yes.”
Well who wouldn’t be?
This was 2005 and Sydney born journalist, Georgia Cassimatis was living her Hollywood dream.
As a freelance writer for majors Glamour, Cosmopolitan, Teen and Marie Claire, she ‘made it.’
Off to New York to interview Beyonce, and in a blink whisked away to Pacific paradise, Bora Bora, while playing scrabble, drinking Red Bull and eating pizza at AA tailored celeb parties.
It was Cassimatis’ interest in the psychology underpinning ‘the celebrity’ that drew her to Los Angeles.
“I met an Australian guy based in LA,” reflects the now Sydney-based Cassimatis.
“We fell madly in love, which I now see as lust and we decided I would move over there to live with him.”
In 2002, the 29-year-old left her job as editor of Barbie magazine and wed her new love.
But LA wasn’t as glamorous as Cassimatis imagined and in two years, her marriage was over.
She was also not making ends meet.
“I thought I was on holiday and would be married and live happily every after in LA but it fell apart,” she says.
“It’s extremely hard to change everything you know and expect to become successful.”
Yet for someone who readily admits that she had felt that, “this can’t be all there is to life, there has to be something more,” LA proved to be a blessing in disguise.
Freelance work snowballed, following her persistent emails to magazine editors, and catchy story ideas including “Gate-crashing A-list parties”, and the infamous, “G-shot procedure.”
A string of celebrity interviews later, Cassimatis found herself waiting nervously at the lobby of Beverly Hill’s Four Seasons Hotel for the A-lister known as a “journalist’s wet dream”.
It was none other than Mr and Mrs Smith’s Angelina Jolie.
“I was honestly was scared she’d give me those monosyllabic answers and give me a gothic look but as it turned out she gave the best answers of any celebrity I’ve ever interviewed,” says Cassimatis.
“She spoke about being bisexual and having lovers. She’s really open and honest, and she’s a real chick’s chick. She looked like she dressed in something she just picked off the bedroom floor – jeans, and a crappy black top with a black bra sticking out.”
Some celebrities on the other hand turned out to be exactly what Cassimatis expected.
“Lindsay Lohan was four hours late for my interview. I had seen her out the night before at a night club till 3am and I thought, wow, I wonder how you will fare tomorrow, and then she made the excuse she had a sore ankle from falling down the stairs. But she was a really fun interview.”
It was only a matter of time before the allure of the rich and famous began to lose their shine.
“Initially I remember thinking, ‘wow they are amazing!’ and are on a platform where they can give a message to the world and people will listen, but they are really just like everyone else,” says Cassimatis.
“Just look at Mel Gibson and all those celebrity f**k-ups and realise that money and fame is not the answer. You can be a really glamorous actress and have a horrible eating disorder.”
As much as she enjoyed the entertaining and diverse lifestyle, Cassimatis also needed a clean break from the cloud of objectification and materialism that hovered over the Hollywood sky.
“The car you drive is your business card over there. Everyone starts trying to keep up with everyone else and people start living false lives,” she says.
“I couldn’t keep up and I realised, well I don’t have to, actually.”
In early 2010, Cassimatis left Los Angeles to return to a more grounded Sydney.
She is currently in the process of completing a travel memoir about LA and the pathway of self-discovery that it took her on.
Cassimatis will return to LA later this year to pursue further work.