Catherine Kladakis reviews Red Carpet Burns – a memoir of one woman’s experience with love, heartbreak and life in Hollywood 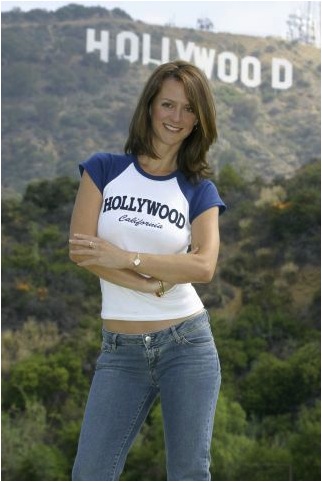 Georgia Cassimatis as an ‘extra’

Love at first sight is just so wonderful right? It’s a crazy, exhilarating wave of euphoria, where one is tempted to move mountains for their love, or perhaps even move countries to be by their side. It’s all so ‘la-la’ amazing, until the mask drops and it’s too late. That’s what happened to Red Carpet Burns author, Georgia Cassimatis, who left behind her family, friends and a promising journalism career in Sydney to be with her gorgeous and charismatic beau, Simon, in Los Angeles.

After the Nigerian scam, the jail bailing, and the emergence of a stoned and emotionally abusive Simon, she was left broken, jobless, and staring a marriage separation in the face.

But Cassimatis refused to pack up her life and return home to Australia.

Instead she forged a lucrative freelance writing career, interviewing a string of high profile celebrities including Brad Pitt, Angelina Jolie, and Ben Stiller.

“There is a silver lining to every situation,” says Cassimatis of her experience.

“I was dealt the lemon, but I felt I went on to make lemonade. Going there to get married was a pathway that was a prelude to the real pathway I was meant to be on – meeting amazing people, having crazy LA adventures, interviewing celebrities in New York, and going on first class world trips to exotic islands.”

With its cover graced by a woman in a ruffled, tangerine evening gown fit for the Oscars, you might be misled into believing that Red Carpet Burns is a book full of juicy, celebrity gossip.

That it is not.

Cassimatis is down to earth and candid, and tells her experience as it is – warts and all.

There are gay housemates, dog-eat-dog run-ins with other journalists, crazy psychic readings, the death of a loved one, and her not so glamorous drunken party hazes.

In Los Angeles, her ethnic differences meant that she was beautiful and exotic.

“The biggest lesson I learnt was to become comfortable in my own skin,” she reveals.

“Being half-Australian, half-Greek was cool. My round bubble butt inherited from my Greek side was considered by Americans to be one piece of ‘hot ass’. Unlike back home in Australia where it was not at all the ‘ideal’.”

The book is lightly speckled with celebrity encounters. There is Ben Stiller’s intense ‘actor’s stare’, the overly nice (and fake-tanned) Jessica Simpson, and rapper Nelly with the “demons in his aura”.

The chapter titled Star F&*king is a tease. Did she secretly get it on with a Brad Pitt-esque celebrity, one may wonder? Cassimatis bursts into laughter when I ask her.

Although our interview is over the phone, I sense the excitement in her voice and for a moment I imagine the sparkle in her eyes as a young woman – just 29 when she first walked through the gates of Hollywood.

Cassimatis, now 40, is currently working as a journalist and producer in Sydney. Will Dorothy return to LA, I wonder?

“Who knows where life will take me now,” says Cassimatis. “For now Australia is home.”

“I think my next book might be about the Greek side of my family and who we are.”

An excerpt from Red Carpet Burns

Frankly, Mum didn’t like Simon the moment she met him. And me being into my four-week love affair, I had absolutely no idea how on earth she was coming to this brutal, prejudiced opinion so quickly. I was gutted, not to mention slightly annoyed, especially considering the frogs I’d been out with.

“Mum meet Simon. Simon, Mum,” I said excitedly, as we walked into the suburban family home on Sydney’s north shore.

“Hi Simon,” Mum said, rather dismissively, not even attempting to fake a half smile. After two seconds, she looked at me with intense concern and said very calmly under her breath, “Georgia, I need to talk to you in the kitchen for a minute about the yard.”

The yard? What’s with the yard? I thought.

“Who is this guy?” she asked, looking at him via the hallway mirror to make sure he couldn’t hear her.

“He’s not your type.” She went straight to the point and I knew deep down, she was at the point of no return. She had made up her mind…

I could not believe she was coming between me and the love of my life, already! What’s more, Mum married a Greek man, which had never been a problem for her family, but it was for his. After hearing all the interracial stories about families not letting their daughters and sons marry or be with who they were truly in love with, I wasn’t going to let this happen.

*Red Carpet Burns is available from harlequinbooks.com.au or at all good book stores nationally.